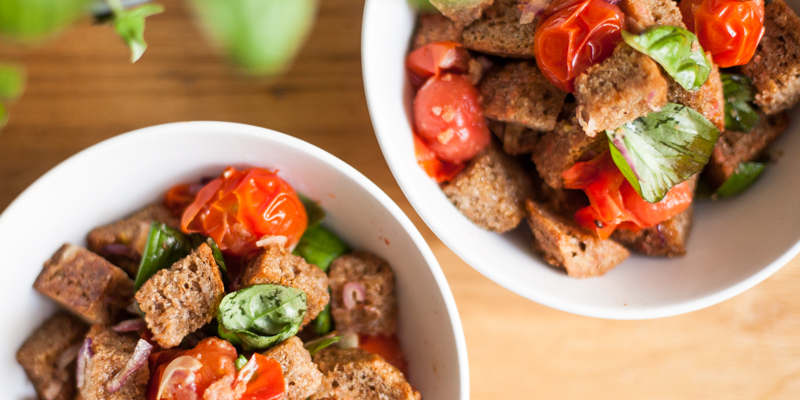 Panzanella is the perfect answer to stale bread! You can make it with seriously any bread, so this is easily adaptable to be gluten-free. I personally love it with no-knead bread.

I love Panzanella! Even if we have a turbulent past. Panzanella is actually one of the dishes that has sent me to the hospital. Yup, the bread used to make the dish had sesame seeds. Normally, I would have hawk-eyed those seeds, but I was a careless young adult, and there are a couple of reasons we didn’t catch them:

Lesson: always order for yourself!!

Nowadays panzanella is not a dish I will order at a restaurant. So what’s a gal to do? Make it from scratch of course! It is the perfect recipe when you want to use up stale bread. We make a lot of bread at home, but always struggle to finish it and don’t want to toss it when it’s just a little too hard.

I would highly suggest using crusty homemade bread for this dish because it’s dense, chewy and soaks up the perfect amount of olive oil while baking. It is a seriously easy recipe. No kneading involved and you can make it the night before, or in the morning and bake it after work.  Lately, we have been using whole wheat flour, and it works just as well. If bread baking is not your thang, then any ‘ol crusty bread will do!

Panzanella is typically made using raw tomatoes and onions. The other day I was not in the mood for the raw onion taste and let’s face it bad breath. I had also recently discovered the beauty of blistered tomatoes.?Light bulb moment! Make it a warm panzanella! Adding the onions to the croutons while they bake gives the dish a delicious mellow dimension. Oh and bonus, the tomatoes burst ever so beautifully when you mix them in with the croutons, which means this baby needs no dressing.

Add some Mozzarella to your Panzanella

This warm Panzanella can stand on its own, but does even better when you pair it with overnight-marinated mozzarella. This is an excellent way to dress up some less expensive mozzarella. All you need to do is throw the cheese, olive oil, dried rosemary, red pepper flakes and sun dried tomatoes in a jar and pop it into the fridge. You can make it at the same time as your bread dough, just sayin’!

This side dish brings it all to the party: a little kick of spice from the red pepper flakes and smoothness from the creamy texture of the cheese. Plus, the softness pairs excellently with the crunchiness of the Panzanella.


Now that I have made one food video I’m hooked! Presenting food video number 2 ☺️

Want more hearty salads? Check out our round-up of the perfect picnic salads.

Crunchy bread, blistered tomatoes, and fresh basil make this warm Panzanella delightful on so many levels. Pair it with a lightly spiced mozzarella and you have a party on your plate! This is a recipe for two.

For the Marinated Mozzarella

Things to make your own bread salad