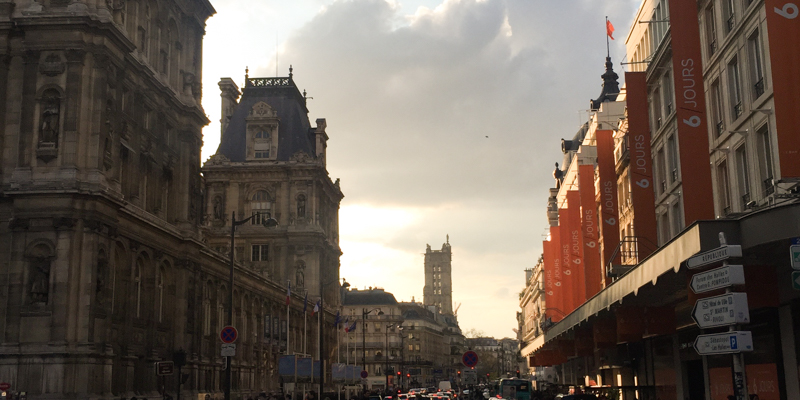 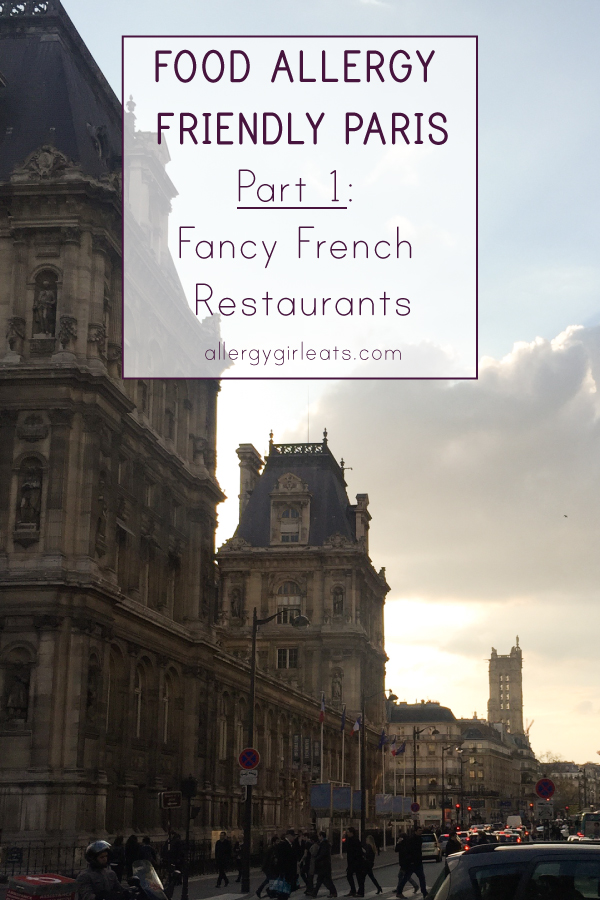 Eating out in France is quite a challenge with a sunflower oil allergy because it is the most used oil in restaurants. This means, I don’t eat out much when visiting France, which is a shame since it’s known for its food.

A couple of weeks ago I had a girls getaway with my mom and sister in Paris, and it was all about food. Pretty much a 100% gourmand, stuff your face, food coma kind of trip.

Since eating out is challenging, renting an apartment is ideal for allergy peeps. It takes the pressure off needing to eat out. We cooked two nights, but because we wanted to try and have a food-filled trip, a lot of research and emailing restaurants in advance took place. 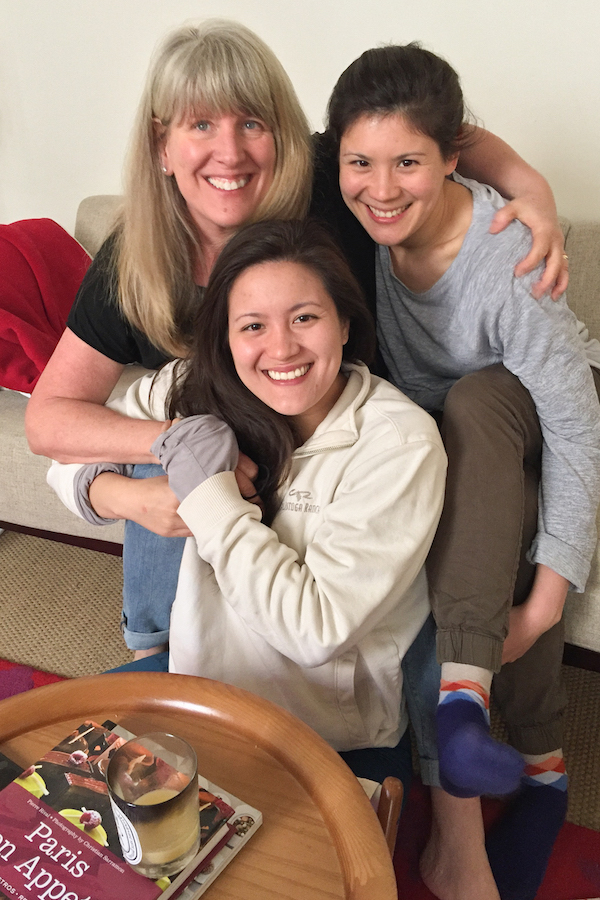 What I learned is I can eat at two kinds of restaurants. One kind is of the break-the-bank variety; let’s call it Fancy French. The other is of the “why did I come to France when all I eat is Italian” variety. We will call it Interesting Italian because it’s Italian with a flair. The food didn’t stop there. We also took a walking tour called ‘Gastronomy Les Halles: Paris Food Tour‘ and visited the one and only Bon Marché.

The best part of the trip for me was I could eat dessert. This never happens! I even had two at one place! OMG, so much cream and butter!

Like my Iceland Trip, I have written small reviews of the places we ate. There is a lot to say about the restaurants, so I have turned what was one very long blog into three! Part 2 will be about the Interesting Italian restaurants and Part 3 about the food walking tour and Bon Marché.

May the gluttonous adventures begin! ?

Le George is a bucket list kind of restaurant. It is the brother restaurant to Cinq, which has 3 Michelin stars. Le George is at the George V Hotel, made famous to me by the film French Kiss. Eating at super fancy restaurants is great when you have food allergies because they have a massive reputation to uphold, and they are very accommodating.

The food was r i d i c u l o u s. Out of this world! I had an onion Tarte Tatin (picture above) that melts in your mouth. Everyone tried it, and it was everyone’s favourite dish! I also had two desserts because I opted for hot chocolate instead of coffee, launching me into a full-on food coma! If anything, go there for the hot chocolate. It is quite the experience; they serve it with a special palette cleansing water, you get as much steamed milk as you want because it is so thick on its own, and the drink itself is pure chocolate gold!

Just look how thick it is! This is before we added milk. 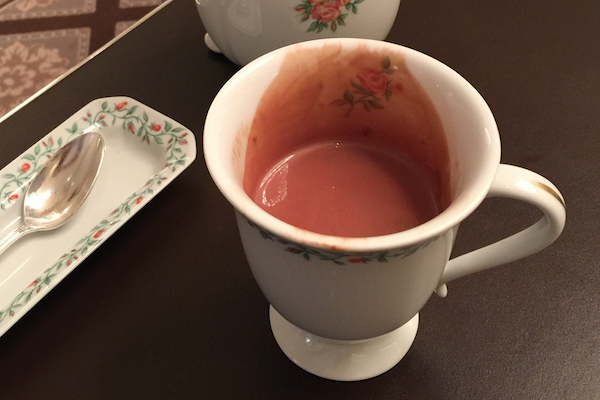 Benoit is an institution. It has been around since 1912 and is the only bistro in Paris to have one star. The food is super French and full of glorious butter and cream! When we emailed the restaurant about my allergies, we specified I would bring my allergy card. The waiter thought it was a genius idea. He did make some jokes about my allergies when he saw the card (I have quite a long list) and then got serious when he saw my worried face. A year ago this would have set me in a tizzy, but I have come to realize that joking is a mechanism people go to when they aren’t used to food allergies. Still I can’t stop the concerned face. It all worked out. They modified the dish I wanted, and most importantly dessert was an option.

Now, let me tell you about this dessert. I had the Savarin, which is kind of like a brioche. It’s pretty much a tasty cakey-bread thing that acts as a vessel for the good stuff. They pour a shot of Armagnac on it, which soaks in like a dream and top it with whip cream (I love whip cream especially if it’s made from delicious French dairy). It was two slices of cake that I had no problem finishing off all by myself!

My sister and I can’t even handle this dessert! ?? The Armagnac is the same age as me! 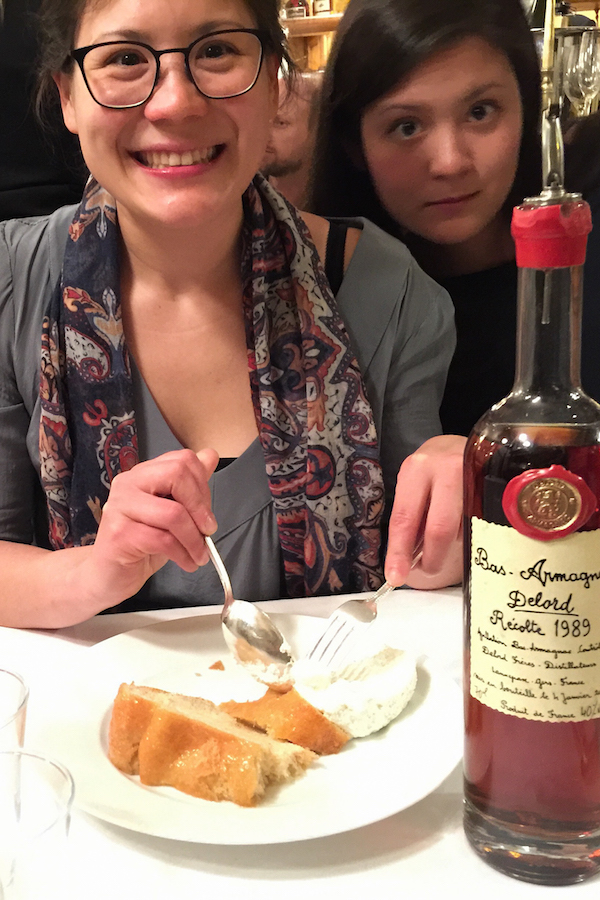 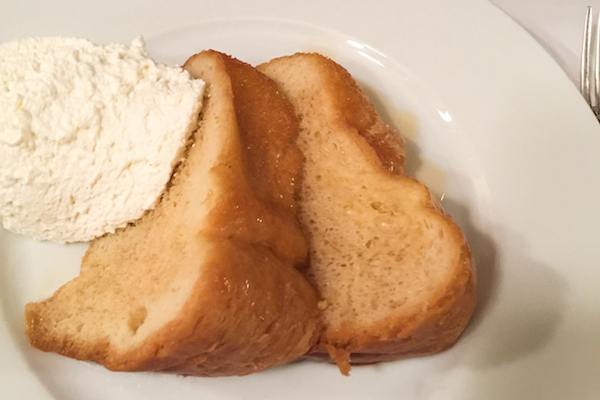 A quick wrap up

These restaurants are once in a lifetime places to go, and I feel super lucky to have frequented them both in the span of a week. If you are looking for an allergy-friendly entirely French experience, I would recommend Benoit because it is a place like no other. You feel like you are walking into a different time and the food just screams French.

How did I get to Paris? Read about my stress free flying experience with easyJet!